6 trees died because of “Vinera Tower” in Tashkent 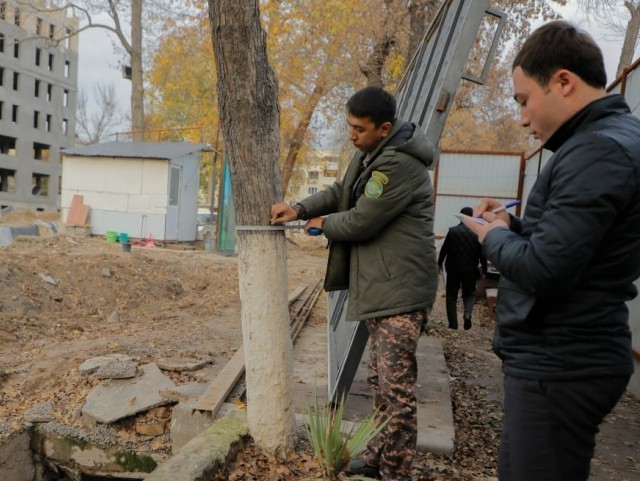 In violation of the law, 6 valuable bushes and trees of lesser value, were transplanted to another place without permission near the former Babur, now “Dostlik” park in Tashkent.   As a result of the death of the trees, there was 218 million soms worth of damage caused to the flora.  This was reported by the press service of the State Ecology Committee.

In the middle of the night, the environmental committee received information about the cutting down of trees at the construction site near Dostlik Park, Shota Rustaveli Street, Yakkasaray District, Tashkent.  It was found that the trees were destroyed by “Vinera Tower” Limited Liability Company, which was warned 2 months ago that there were 22 native trees in the construction area and to not cut them down without permission.

However, on 21 November 2022, 6 trees, of which 2 were very valuable and the other four less so, were transplanted by the Limited Liability Company to another place without proper permission and contrary to the law, the trees died.

It was also found that the roots of 4 trees were damaged as a result of digging a pit for construction.  Currently, there are 16 ornamental trees in the construction area.

According to the preliminary estimates, damage to the flora was caused in the amount of 218 million 370 thousand soms.  The collected materials were duly formalized and submitted to the district prosecutor’s office,” the ecological committee said.

The Illegal cutting down of trees is a violation of the requirements of Articles 32 and 37 of the law of the Republic of Uzbekistan “On the Protection and Use of Flora.”  According to the requirements of the law, before the implementation of construction projects, it is established to develop environmental normative project documents, as well as to pass the State environmental expertise in a mandatory manner.  It was found out that this construction facility started construction without obtaining the conclusion of the State Environmental Expertise.

The ecological committee added that “Vinera Tower” Limited Liability Company is not violating the requirements of the law “On protection and use of flora” for the first time.  On 23 March 2022, it was determined that the illegal cutting down of 6 trees in the area by the Limited Liability Company caused damage to the flora in the amount of 430 million 515 thousand soms.  The situation was duly formalized by the Tashkent City Environmental Department, submitted to the district prosecutor’s office, and a decision was issued by the Tashkent Inter-District Economic Court on 16 September 2022 to recover the damage caused.