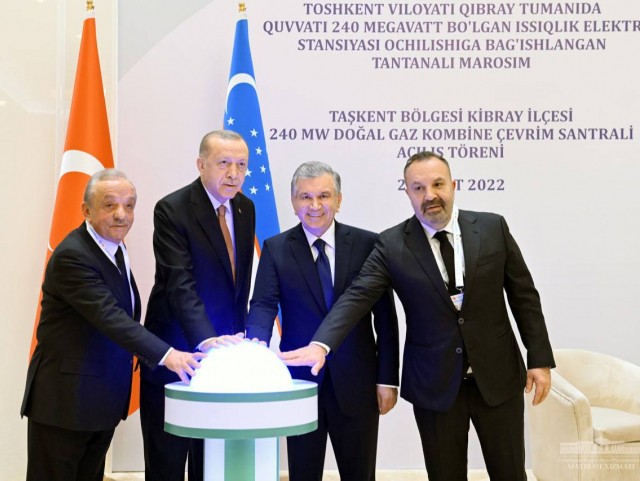 Yesterday, 29 March, during the visit of Turkish President Recep Tayyip Erdoğan to Uzbekistan, another important event, which was the launch of a modern thermal power plant in the Tashkent region and the beginning of construction of a similar station in the Syrdarya region, was held. These projects are being implemented by the Turkish company Cengiz Enerji.

Addressing the ceremony, the president of Uzbekistan Shavkat Mirziyoyev stressed the importance of the implemented projects, noting that these complexes are a vivid manifestation of the results of economic cooperation between Uzbekistan and Turkey. It was noted that within a year, Turkish companies have implemented five major energy projects of great importance for the dynamic economy of Uzbekistan. In particular, the total capacity of these stations, including today’s projects, will reach 1.4 thousand megawatts.

As a result of the modernization of the energy sector of Uzbekistan until 2026, 29 projects worth 12 billion dollars will be launched on the basis of public-private partnership. They will generate an additional 71 billion kilowatt-hours of electricity and save 12 billion cubic meters of natural gas per year.

The Head of State thanked the engineers and builders involved in the construction of the power plant. President Shavkat Mirziyoyev and President Recep Tayyip Erdoğan then pressed a symbolic button to launch a thermal power plant in the Qibray District and start construction of a thermal power plant in the Xovos district.
The Qibray TPP has a capacity of 240 megawatts and produces 2 billion kilowatt-hours of energy per year.

The new thermal power plant in the Xovos district has a capacity of 220 megawatts, and it  generates 1.7 billion kilowatt-hours of electricity per year.