16 documents were signed between Uzbekistan and Hungary 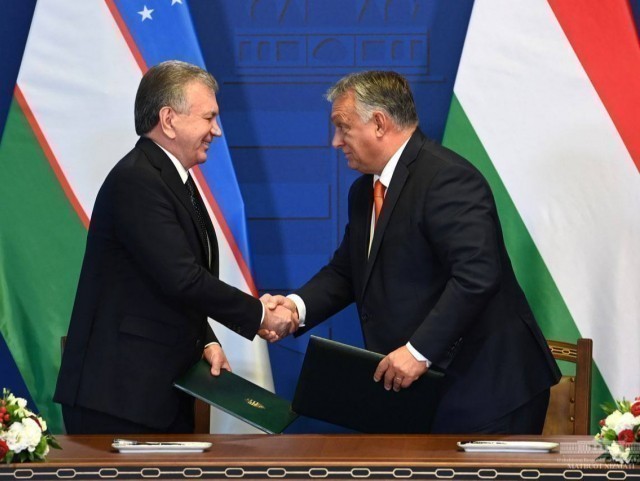 Yesterday, 4 October, a signing ceremony took place in Budapest, following high-level negotiations between the delegations of Uzbekistan and Hungary.

President Shavkat Mirziyoyev and Prime Minister Viktor Orban signed a joint statement on the development of a strategic partnership between the Republic of Uzbekistan and Hungary.

The document noted that the negotiations were conducted in a friendly, open, and constructive spirit, provided for the intensification of mutually beneficial cooperation in all aspects, and noted that 30 years had passed since the establishment of diplomatic relations.

In addition, 15 documents aimed at further expansion of the Uzbek-Hungarian strategic partnership have been signed at the level of the governments, ministries, and departments of the two countries. These are:

•     Plan of Action for Cooperation in Science and Technology;

•     Plan of Measures to Enhance Cooperation in Agriculture;

•     Agreement on Cooperation in Physical Education and Sports;

As well as in the fields of customs, justice, environmental protection, horticulture, and greenhouse production, viticulture, investment, Academy of Public Administration of the Republic of Uzbekistan and the University of the Hungarian Civil Service, Samarkand Oblast and KaiduBihar district, information on international relations - signed memoranda of cooperation between the think tank and the Institute of Foreign Affairs and Trade, the Tashkent State Agrarian University and the Hungarian University of Agriculture and Natural Sciences.
Following that, the President of the Republic of Uzbekistan Shavkat Mirziyoyev completed a two-day official visit to Hungary and returned to Tashkent.