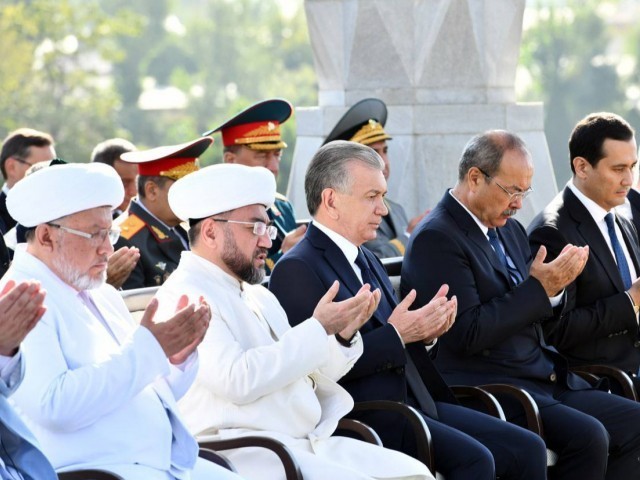 As we reported earlier today, 31 August, president of the Republic of Uzbekistan Shavkat Mirziyoyev visited the Alley of Martyrs' Memory early in the morning.
Representatives of state and public organizations and the elderly gathered here to pay tribute to the memory of the victims of repression.  The verses of Koran were read and prayers were said for the memory of those who passed away so far.  Pilaf was distributed to the people.

Since 2001, 31 August has been celebrated as the “Day of Remembrance of the Victims of Repression.”  Work continues to be done to delight the souls of our ancestors, to study their lives and heritage.  Last year the museum “Memorial of victims of repression” was reconstructed.  Its branches were opened in the Republic of Karakalpakstan and all regions.

This year, the museum organized an exhibition dedicated to the 100th anniversary of the sending of jadid (Arabic- “new”, Muslim modernist reformer within the Russian Empire in the late 19th and early 20th century) students to study in Germany.

The Head of State entered the museum and got acquainted with this exhibition.

“There is a reason why we come here every time and pay attention.  Achieving independence was not easy.  Although 31 years have passed since our independence, our grandparents tried 100 years ago for it.  100,000 of our compatriots were repressed, and 13,000 were brutally executed.  Why? There was an analysis.  They were our greatest heroes; the heritage of the nation and they knew 2-3 languages.  They knew how to liberate our country and lead it to development.  Their voices are heard here,”- Shavkat Mirziyoyev says.

Speaking of this, the President recalled a verse from the Holy Koran.  In the 169th verse of the surah “Al-Imran” it is said: “Do not consider those who passed away in the way of Allah dead, they are alive, they are being fed in the presence of their Lord”.

The Head of State noted that this history has not yet been fully studied, and research should be continued to identify and restore the memory of the victims of repression.

“I gave the task to find documents all over the world related to the Uzbek nation even if it is a piece of paper, no matter how much money should be spent.  How many more victims of repression have been identified in recent years?  From the point of view of justice, we restore the names of our heroic grandfathers.  Over the past year, 235 such compatriots have been acquitted by the Supreme Court of Uzbekistan.  We are creating museums and schools named after our jadid grandfathers.

We built the school of Abdulla Qodiriy and established a monument to him in the center of Tashkent.  Why? People should see their works, think “whose descendant I am?”. Or how hard it was to restore the Cholpan?  Today we say: “go down, go inside the nation, we get strength from people.”  Cholpan also said this.  Such good deeds cannot be stopped.  It is necessary to release new books and films”, - the president said.

Shavkat Mirziyoyev expressed his gratitude to the hardworking scientists and intellectuals who are doing research on this path.  It was emphasized that the life and works of Jadids should be conveyed to young people through television and social networks and that this subject should be given a wide place in school lessons.  The initiative to establish a department for teaching the spiritual heritage of enlightened grandfathers at the International Islamic Academy of Uzbekistan was put forward.