An employee of the RPS (Road Patrol Service) beat a driver in Tashkent. DIA (The Department of Internal Affairs) identified the reason for this (video) 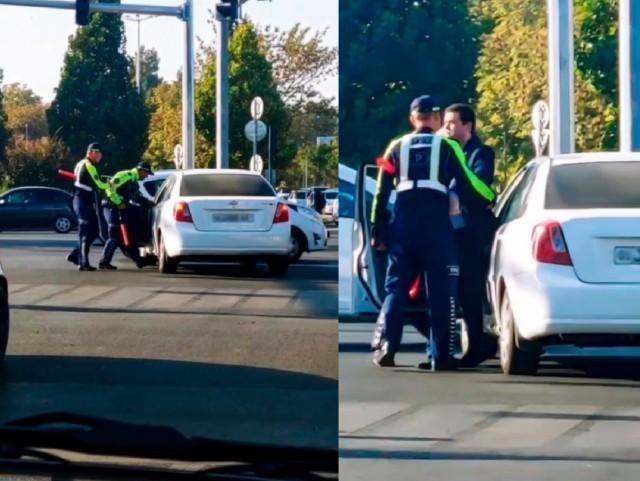 A video of a traffic patrol officer hitting a driver is circulating on social networks and is causing a lot of discussions. The main DIA of Tashkent city gave an official response to this situation.

It was reported that today, October 7, from approximately 07:30, the inspector of the DIA Traffic Department of Tashkent city B.Nazirkhojayev was regulating traffic at the intersection of Bunyodkor and Islam Karimov streets in Shaikhontohur district to eliminate traffic.

It was reported that today, October 7, from approximately 07:30, the inspector of the Traffic Safety Department of the IAD of the city of Tashkent, B.Nazirhojayev, cleared the traffic at the intersection of Bunyodkor and Islam Karimov streets in Shaikhontohur district. was regulating the movement to achieve.

However, at 08:30, the driver of the Lacetti vehicle, E.A., was born in 1984. using a mobile phone, entered the intersection without obeying the signal of the inspector of the Road Patrol Service. While the YPX inspector was explaining the violation to the driver, the driver insulted the YPX inspector's mother, as a result of which a mutual dispute arose. To make a legal assessment of the driver's actions, an investigation has been started by the Civil Appeals Department of the Internal Affairs Body of Shaikhontohur district.

It is noted that a service inspection is being conducted by the Department of Internal Affairs of the city of Tashkent regarding the actions of the inspector of the Road Patrol Service. It was noted that a legal decision will be made on the day of the inquiry.