A gold dinar dating to Seljuk period is found in Termez 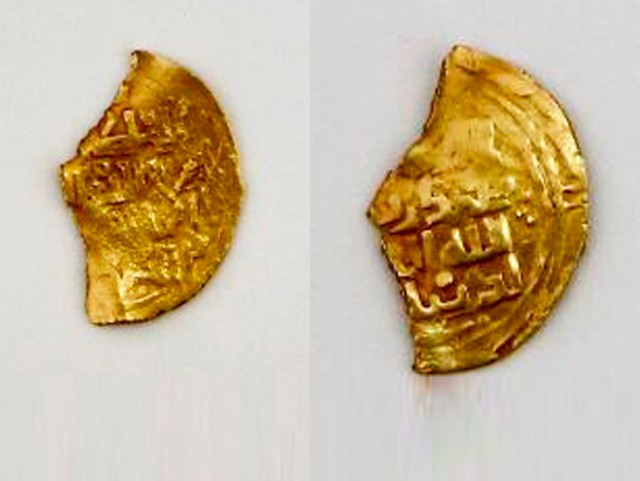 Pottery items, and gold dinars of the Karakhanid and Seljuk periods were found in Termez.  The findings have been transferred to the museum.  The Ministry of Tourism and Cultural Heritage reports this.

It is noted that a resident of the neighborhood (makhalla) «Dustlik» of Termez district, Ulkan Eraliyev, discovered a piece of yellow metal on the ground during the irrigation of their garden and contacted the Termez Archaeological Museum.  A team from the museum and the officials of the regional cultural heritage administration visited to the site and conducted the initial excavation process.  Not only were dinars found in the garden, but also ceramics of Karakhanid and Seljuk ceramics were revealed.

Ulkan Eraliyev handed over the valuable findings to the Termez Archaeological Museum in accordance with the established procedure, after which he was reportedly paid a fee based on the current legislation.

The valuable items were first viewed by museum specialists and numismatists led by the director of the museum.

“Mansur Normuminov, the doctoral numismatist of the museum, was able to read the words «Allah» and «Muhammad» on the front of the gold dinar, as well as some letters of the Arabic alphabet.  The text on the back of the coin had almost disappeared.  The damaged, but well-preserved coin, the gold dinar, weighed 1.92 grams.  It is known that in Muslim countries gold coins were called «dinars», and silver coins – «dirhams»,” – Tursunali Koziyev, First deputy director of the agency of cultural heritage said,

Due to its strategic position, Termez was the subject of frequent disputes and wars between empires.  In the second half of the 10th century, the city became the scene of bloody clashes between the Karahanids and the Ghaznavids.  The Seljuk princes Togrulbek and Chagrilbek captured Termez and its surroundings, taking advantage of the fact that other rulers were already exhausted by war with each other.

This year marks the 20th anniversary of the opening of the Termez Archaeological Museum.  For the last 20 years, the museum has not had gold coins.