The president visits a new transport facility in Tashkent 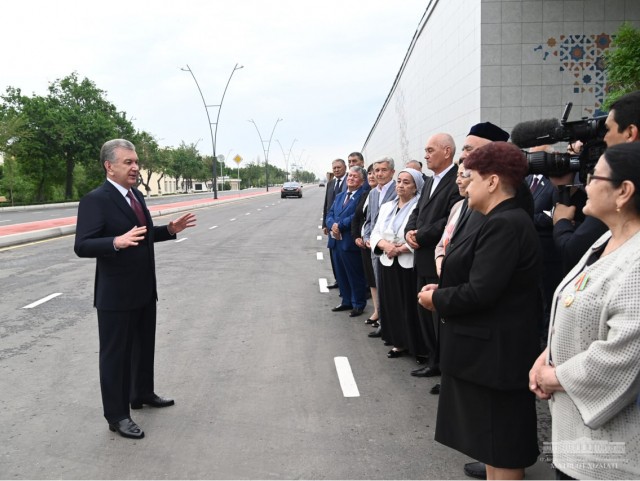 Today 3 May, the president of the Republic of Uzbekistan Shavkat Mirziyoyev familiarized himself with new elements of road infrastructure that have been built in Tashkent.  This was reported by the president's office press service.

It is noted that the construction of the road infrastructure began in August 2020.  The project includes the construction of a 6-lane motorway which is 6.5 km in length and incorporates 6 bridges.  It effectively connects Kipchak Street in the Sergeli district with the streets of Choponota and Usmon Nosir in the Yakkasarai district.

To date, cars traveling from the Sergeli district to the center of the city have mostly followed one road – New Sergeli Street.  The road, which is designed for 4,000 cars per hour, actually operates with more load, so in the morning and in the evening, it would be very busy.

The new road has a capacity of up to 12,000 cars per hour.  This will eliminate the problem of traffic congestion and create great facilities for residents of the capital.

According to the report, the bridges, their entrances, and exits were rationally designed and connected to existing roads without traffic lights.  As a result, vehicles can be easily and conveniently connected to other routes.

"Another benefit is its impact on the weather.  It is known that the nationwide project «Green Space» is being implemented in our country.  However, this means not only planting trees, but also protecting the environment.  The new road will cut greenhouse gas emissions by a third. Energy-saving lanterns and espaliers have been installed along the roads.  The vacant fields have been seeded, pavements and bicycle paths have been created." - the report said.

It was noted that there was a presentation of proposals for the construction of roads and improvement of the urban transport system of Tashkent.  The project to construct a 6-kilometer road up to the ring road, thus bypassing the Sergeli district and continuing the road which was opened today, has been approved.

The Head of State said that more attention should be paid to increasing the capacity of roads.

“Roads cannot be built or expanded everywhere.  Much depends on the true organization of the routes.  Now it is necessary to increase the capacity of roads and crossroads, to create conveniences for the population through digitalization», –Shavkat Mirziyoyev said.

The president talked with prominent figures and public activists of Tashkent.

“According to our national values, building roads and bridges is a good thing.  It is gratifying that this road, which reduces distances, is opening on this great holiday.  No one ever believed when they are asked, “Is it possible to build 10 houses in Sergeli?”  Over the past five years, about 800 apartment complexes have been built in Sergeli and Yangihayot districts, and about 100,000 people have received housing.  Now the roads are developing.  Just know that we have consulted experts about future projects.  "In time, by working hard, we can make them." said the head of state.