Norbaeva meets with the young President of Turkmenistan 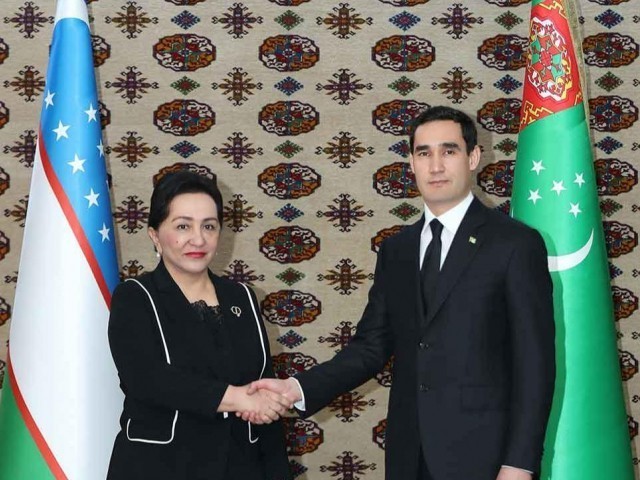 The speaker of the Senate of the Oliy Majlis Parliament of Uzbekistan, Tanzila Norbayeva, currently in Ashgabat to participate in the Meeting of the Dialogue of Women of Central Asia and the Russian Federation, met with the President of Turkmenistan, Serdar Berdymuhamedov.

The importance of ensuring the regular work of the intergovernmental commission on trade, economic, scientific, technical, cultural and humanitarian cooperation was stressed in the meeting.

«The parties agreed on the plans to intensify the inter-parliamentary dialogue in order to develop relations between the regions of the two countries, as well as to promote the expansion of production cooperation between Uzbek and Turkmen producers», – the press service under the Senate of Uzbekistan said.

The sides also discussed issues of strengthening cooperation in the cultural and humanitarian sphere, including the continuation of the practice of holding joint events for the people of the two countries.

Tanzila Norbayeva also met in Ashgabat with Chairman of the Public Meeting of the National Council of Turkmenistan, Gurbanguly Berdymukhamedov.

For reference, presidential elections were held in Turkmenistan on 12 March of the current year. They were attended by 97.17% of voters or 3 million, 362 thousand 52 people.  After the Central Election Commission counted all the ballots, it declared that the candidate from Democratic Party, Sardor Berdymuhamedov, who received 72.97 percent of the vote, won the election.