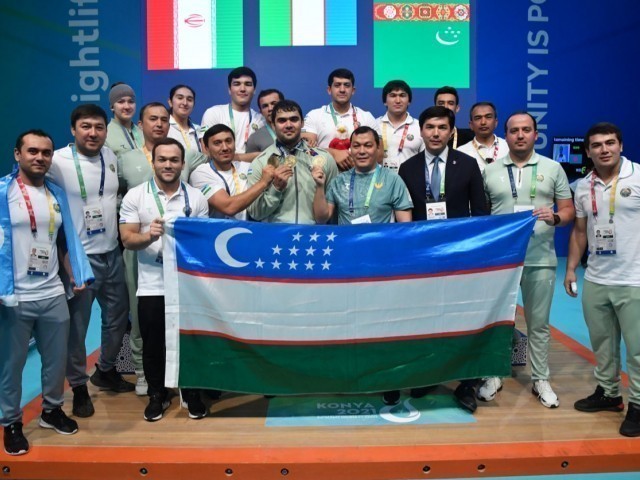 The 5th Islamic Solidarity Games, which are being held in Konya, Turkey, are underway.  On 15 August, the competition was very successful for Uzbek athletes.

Two Uzbek judo wrestlers, who competed in the female weight category up to 52kg, rose to the arena.  Diyora Keldiyorova showed that she is unrivaled in her weight at the Islamic Solidarity Games, and Sita Kadamboyeva won a bronze medal.  In addition, Sevinch Isakova, who participated in the weight category of up to 63kg, added another bronze medal to the account of the delegation of Uzbekistan.

It should be noted that the men’s judo team of Uzbekistan also successfully participated in the games.  Shahram Akhadov in the final match in the weight category up to 73kg defeated Azerbaijani Narimon Mirzoyev and became the champion of the Islamic Solidarity Games.

The Paralympic team of Uzbekistan also successfully participated in the Islamic Solidarity Games.  Paralympians from Uzbekistan went to Turkey with 7 participants in 4 Paralympic sports.  As a result, the Uzbek paralympics teams finished their participation in the games, winning 3 gold, 2 silver, and 3 bronze medals, a total of 8 medals.

Games scheduled for 15 August were also successful for the Uzbekistan fencing and swimming team.  The national fencing team which consists of Zaynab Daibekova, Paola Pliego, Aysulu Usnatdinova, and Sevinch Ismailova lost to Azerbaijan in the final match and was awarded a silver medal.  Silver medals were also awarded to the Uzbekistan swimming team members Alexey Tarasenko, Olimjon Odilov, Yegor Petryakov, and Khurshidjon Tursunov.

For reference, the Islamic Solidarity Games will continue until 18 August.  To date, the delegation of Uzbekistan has gained 40 gold, 28 silver, and 44 bronze medals, a total of 112 medals.  Only Turkey, which is the host country, is ahead of Uzbekistan.