Blinken's aide comes to Uzbekistan and meets with Allamjonov and Mirziyoyeva 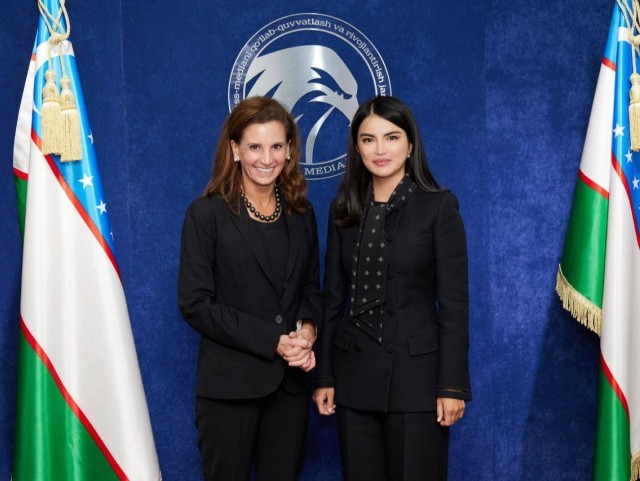 Assistant Secretary of State for Public Relations Elizabeth Kennedy Trudeau, who is on a business visit to Uzbekistan, on 6 October, met with the Deputy Head of the Presidential Administration of the Republic of Uzbekistan Komil Allamjonov and Said Mirziyoyeva, Deputy Chairman of the Board of Trustees of the Public Fund for Support and Development of National Mass Media.

The meeting with Allamjonov discussed a wide range of issues, such as ensuring the openness of state bodies, communicating with the population, combating fake and false information, development of the media sector, and improving the media literacy of the population.

“The meeting was held in a sincere and friendly spirit and was fruitful for both sides.  I was glad that Mrs. Trudeau visited our country, it was nice to talk with her and to hear her impressions about the changes in our country”, - Komil Allamjonov writes, evaluating this dialogue.

Saida Mirziyoyeva, the president’s eldest daughter, discussed with Elizabeth Kennedy Trudeau the importance of combating disinformation and improving media literacy among young people and children.  She told a high-ranking official of the United States about the activities of the Public Fund for the Support and Development of National Mass Media.

"I liked the following consideration from the American guest: "We, Americans, are not here to teach you what to do. We are here for cooperation. And we consider you to be a reliable and equal partner. I am sure that we will have fruitful cooperation”, - Saida Mirziyoyeva writes.

For reference, Elizabeth Kennedy Trudeau is a Senior Foreign Service Officer and acting Assistant Secretary of State for International Public Affairs.  She previously served as Senior Deputy Assistant Secretary of Defense for Public Affairs.  Prior to her appointment to the Pentagon, Trudeau served as Consul General of the United States in Belfast, Northern Ireland, and Consul General of the United States in Lahore, Pakistan.  Before her post in Pakistan, she served as Director of the State Press Department and Spokesman for the Department in Washington.